Super Doctors ® names Dr. John Camp, Dr. Kenneth Kaminski, Dr. Michael Russell and Dr. Patrick Wupperman to its prestigious 2018 list of top doctors in Texas Monthly. This distinction is reserved for about five percent of the region’s active physicians. You can find our Azalea physicians in the December issue of Texas Monthly in the Orthopaedic section of 2018 Texas Super Doctors.

Dr. John Camp sub-specializes in hand and upper-extremity orthopedics. He was first named to the Super Doctors list in 2009.

Dr. Kenneth Kaminski specializes in primary and complex hip and knee replacements, revision joint surgery, and hip and knee arthritis. From 2015-2017, Dr. Kaminski was named to the Rising Stars list of physicians in Texas Monthly.

This is the third consecutive year that Dr. Michael Russell is included on the Super Doctors list. Dr. Russell not only specializes in spine surgery; he also serves as the president of  Azalea Orthopedics.

Dr. Patrick Wupperman is making his fourth appearance in the Super Doctors issue. Dr. Wupperman treats sports injuries as an expert in shoulder surgery and treating knee and elbow injuries. Dr. Wupperman spent two years on the Rising Stars list in 2013 and 2014.

Super Doctors uses a rigorous and patented process to compile its yearly list of top physicians in Texas. That process includes asking physicians to nominate colleagues they would trust with their own medical care. In addition to the survey of doctors, Super Doctors also performs an independent evaluation of physicians by research staff, a peer review of candidates by practice area and a good-standing and disciplinary check. Doctors who received the highest scores were invited to serve on a blue-ribbon panel to evaluate other candidates. The doctors who received the highest points from surveys, research and the blue-ribbon panel review were selected for inclusion on the Super Doctors list. 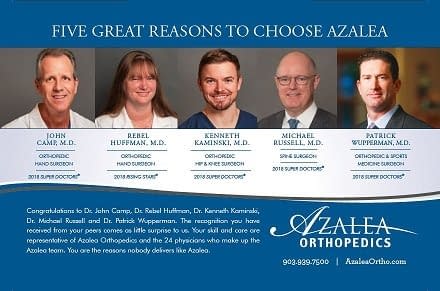